What is my Daemon?

I recently picked up the audiobook version of Philip Pullman's 'His Dark Materials', and while I'm really enjoying revisiting the sprawling story of armoured bears, witches, plucky pre-teens, and other-world physics, what I'm finding myself thinking about most is the idea of each person having a 'daemon' - an animal companion which is an external manifestation of your soul and character, an inseparable part of yourself.

A quick 'what's my daemon' Google search will reveal lots of online quizzes (basically personality tests of varying quality) designed to give you an answer to this question. Among the various results I got today were: otter, cat, hare, and owl.
Unfortunately, in direct contradiction of my strictly scientific ideas of the non-anthropomorphisation of animal behaviours, these pronouncements tend to evoke certain very definitely human traits. Where do these ideas of animal characteristics arise? Probably some are due to simple animal behaviour, some certainly have folkloric origins, and some (of mine, anyway) are absolutely traceable to childrens' literature.
The image I have of the otter as a playful, active, and mischievous animal takes me back to Brian Jacques' wonderful 'Redwall' series of novels. Now, some of you will shiver with disgust at the thought of whole books full of talking, anthropomorphised mice, badgers, squirrels, hedgehogs, rats, weasels, and otters, but these are delightful stories of adventure, bravery, nobility, and the beauty of country life. The animals are quite stereotyped - all the badgers are brave and noble warrior kings and queens; the hedgehogs are friendly bumpkins speaking in West Country dialect; the otters are playful river gymnasts; the rats, weasels, stoats, and snakes are always baddies; the mice are the everyman - humble, vain, brave, shy, inquisitive, creative, clever, and helpful. Which type of otter would be nice to have as a companion? I like the sound of the African clawless otter, which is described as being exceptionally playful, enjoying mock fighting, mud-sliding, and noisy, yapping chases. 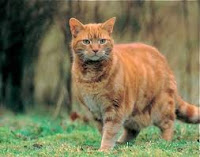 My feelings about cats are well-known to my family at least - I am most definitely a cat rather than a dog person. While I've read novels with cats as the main characters ('Thomasina', by Paul Gallico; 'The Incredible Journey', by Sheila Burnford), I don't have any anthropomorphic view of them as I might of other animals. I think the reason is that we always had cats as pets while I was growing up, so my main impressions of them are from direct experience. I think a cat would probably be quite a good match as a daemon for me - somewhat solitary and cautious, but also whimsical (ever seen a snobby grown cat suddenly abandon everything to chase a spot of light around the room?). I'd like a lovely ginger tomcat as a daemon, please.
In many mythologies, hares are symbols of femininity and fertility, with the meat of the hare being prescribed for male sterility by Pliny the Elder. In Elizabeth Goudge's 'The Little White Horse', Serena the Hare (rescued from a trap and adopted by the main character Maria Merryweather) is an elegant, noble, intelligent, and graceful creature. 'Hares are clever and brave and loving, and they have fairy blood in them. It's a grand thing to have a hare for a friend.'

And an owl. I've been keen on owls for a long time now, ever since I first read the amazing Alan Garner novel 'The Owl Service' many years ago. If you haven't read it, I would highly recommend that you do. A heady mix of mythology and mystery, its extraordinary atmosphere is one that you'll remember forever. The owl is a sinister presence in the story - feathers mysteriously appearing, sounds in the night, prints of claws in the dust, sabotage, and madness. And yet it has caused a fascination in me for these birds, which are simultaneously associated mythologically with  death and wisdom. If I was to have an owl for a daemon, I would definitely want a beautiful Barn Owl. This species is now unfortunately quite rare in Ireland, although I did once see one in the woods where I used to live, like a ghost swooping through the trees.
What would it be like to have a constant companion, a talking animal which (who?) shared your deepest character traits. I remember dreaming once, years ago, of wandering through a city alone, with a leopard by my side. But that was purely an animal, a protector. A daemon would be a walking, flying, hopping mirror of yourself, a conscience sitting on your arm, an advisor whispering in your ear, a comfort in the dark.