Two of the books I read this week concerned one of my main loves in fantasy literature - dragons. They were 'Blood of Tyrants' by Naomi Novik and 'Joust' by Mercedes Lackey.
'Blood of Tyrants' is the eighth book in the Temeraire series, briefly mentioned previously by me here. It was released yesterday by Del Rey in the US, but the UK publication date has not been decided yet, as far as I can tell. The series has been optioned by Peter Jackson, so we'll have to just keep our fingers crossed that something ends up being done with this terrific source material. 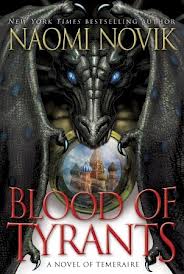 In this penultimate adventure, Laurence and Temeraire find themselves in Japan, China, and then Russia as they head towards a final showdown with Napoleon. The novel opens in Japan, as we discover that poor Laurence has been subjected to the somewhat tired plot device of an accident causing amnesia. He has forgotten everything which has occurred in the years since he captured Temeraire's egg. Luckily, in this case the device does serve the interesting purpose of illustrating very clearly the major changes of opinion which Laurence has experienced, primarily towards dragons and aviators. When he is first reunited with Temeraire early on in the novel, his behaviour towards that noble beast shows a stark contrast to that of the previous years of adventure. It's a neat way of showing rather than telling the reader to what an extent the character has developed. 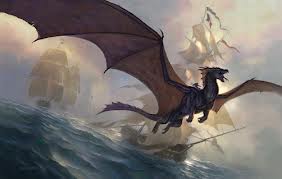 Temeraire is his usual self - brave, sometimes capricious, always loyal. We are introduced to yet more fascinating species of dragons - in this case Japanese species - and intriguing concepts of how they fit into Japanese society. The action escalates nicely towards what will be the final volume in this series, as Laurence, Temeraire, and their Chinese and Russian allies prepare for a climactic final battle with Napoleon. However, I felt that the major strength of this book is in the thought it provokes on some more serious issues. By introducing dragons in various societies (those owned by rebels in Western China and the Russian dragons, in particular) which are treated poorly, or like animals, the reader is forced to consider issues of self-determination and of natural rights and justice. Throughout this series, readers will have come to know dragons, through Temeraire, to have the same potential for compassion, bravery, and cruelty,  to respond as well to education and justice, as their human counterparts. How then can the we approve of the treatment of these creatures, for example in Russia, where massive metal pins may be driven deep into the animals' muscles to enable them to be chained up? How can we approve of human 'masters', for example the British, forcing the animals to fly into battle and fight fiercely, without respect for the animals wellbeing beyond physical fitness and without any pay? Of course, while these are valid questions in the world of the novel, they are worthless in the real world except in so far as they prompt the reader to think about the thinly-veiled analogy of slavery. If we object so viscerally to the treatment of these animals in the novel, how much more strongly must we react to these events in the real world. Slavery is a worse problem in the world at the moment than it ever has been in the past - today an estimated 12-27 million people remain slaves worldwide.
To briefly return to my purpose - a few words about 'Joust' by Mercedes Lackey. I picked this
up secondhand in Raven Books in Blackrock, Dublin - a haven for bibliophiles, if you're ever in the area! It was published in 2003, and unfortunately my search for more standalone fantasy novels is not yet over, as it is the first of four. It combines alternative history of Ancient Egypt with animal husbandry - in this case of dragons. 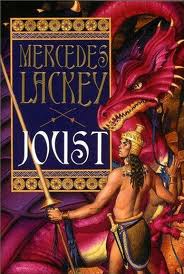 Vetch is an indentured serf, bound to serve a master who took his family's farm and was responsible for the death of his father. This master is particularly cruel to Vetch, doing just barely enough to keep the boy alive. One day, a passing Jouster (dragon rider) observes this cruelty, and as a way of taking Vetch away from his master, claims the serf (as property of the Great King) in order to make Vetch his dragon boy, caring for the dragon and its equipment. Of course, as a farmer's son, Vetch shows a great aptitude for this work. He becomes intrigued with the accomplishment of his new master Ari, who is the only Jouster whose dragon is genuinely tame, and not simply drugged into docility.
In the detailed descriptions of dragon behaviour, training methods, and husbandry, 'Joust' reminds me somewhat of another fantasy I've read recently - 'Zenn Scarlett' by Christian Schoon, discussed here. I'd recommend both of these novels to any young person interested in animals. Also, interestingly, while the slavery aspect of 'Joust' is actually much more explicit and discussed more frequently than in 'Blood of Tyrants', I didn't feel that it was as thought-provoking. Altogether a very fun read.
Exciting news - I've just received my advance reading copy of Scott Lynch's long-awaited follow-up to 'The Lies of Locke Lamora' and 'Red Seas Under Red Skies' - 'The Republic of Thieves'. I can't wait to read, and I'll let you know (spoiler-free) closer to the release date!