A Slow Month for Reading

So I have rediscovered during this last few weeks the delight of rereading as a fantastically comforting occupation in rough times. During June I've reread some Wheel of Time, a couple of Agatha Christie mysteries, my favourite Fred Vargas, and my ultimate happy-time in book form - Harry Potter. It's been an enjoyable, but not very productive, reading time. Of course, while familiar settings, characters, and ideas are very comforting, there should also be time for the more positive and forward-thinking activity of discovering new favourites. The two books I've read for the first time in the last month have been 'Toby Alone' by Timothée de Fombelle and 'Proxy' by Alex London.
'Proxy' was released a few weeks ago on June 18th by Penguin US. Here's the blurb: 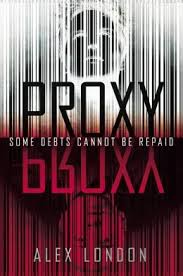 Knox was born into one of the City's wealthiest families. A Patron, he has everything a boy could possibly want—the latest tech, the coolest clothes, and a Proxy to take all his punishments. When Knox breaks a vase, Syd is beaten. When Knox plays a practical joke, Syd is forced to haul rocks. And when Knox crashes a car, killing one of his friends, Syd is branded and sentenced to death.

Syd is a Proxy.  His life is not his own.

Then again, neither is Knox’s. Knox and Syd have more in common than either would guess. So when Knox and Syd realize that the only way to beat the system is to save each other, they flee. Yet Knox’s father is no ordinary Patron, and Syd is no ordinary Proxy. The ensuing cross-country chase will uncover a secret society of rebels, test both boys’ resolve, and shine a blinding light onto a world of those who owe and those who pay. Some debts, it turns out, cannot be repaid.

I really enjoyed this one. It was a lightning-quick read - I finished in a matter of hours. Syd is an extremely sympathetic main character - generous, compassionate, and practical. The relationship between him and Knox, from whose point of view the story is also told, starts off on a very rocky basis as Syd is Knox's 'whipping boy' - taking severe punishments every time (and there are many) that Knox breaks the rules. While some of the science didn't fully make sense (I thought), I'd thoroughly recommend this to fans of 'The Hunger Games' - it's also a whirlwind adventure which does provoke some deeper thought about class structures, democracy, and justice. Great summer reading for adults too!
'Toby Alone' was first released as 'La Vie Suspendue' in France in 2006, and was 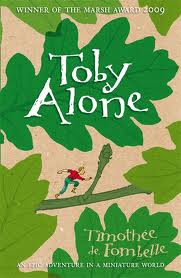 subsequently translated by Sarah Ardizzone and released for the UK market in 2008. As well as being on my 'Books About Tiny People' list, I decided it was a good time to read this one at the moment because of the opportunity to compare it to an animated movie with some similarities - 'Epic', released in May. Both feature tiny people living in the forest, and both promote a environmental message. Both put this message forward in quite a simplistic way - the two dimensional 'baddies' try to destroy the tree or forest, and the equally two dimensional heroes try to stop them. I never felt that the sizes described in 'Toby Alone' would be at all feasible - is 1.5 millimetres small enough that most of the characters in the book believe that their Tree is the whole extent of the world, making talk of other Trees tantamount to heresy? I'm glad I read this, and it was an enjoyable and at times very fun read, but I probably won't bother reading the sequel. I'll just have to find more of my 'Books About Tiny People' to obsess over - possibly Terry Pratchett's Bromeliad trilogy - 'Truckers', 'Diggers', and 'Wings'.
Posted by Acuparia at 7:37 PM